The US COVID-19 Atlas

The Center for Spatial Data Science at the University of Chicago has been developing more refined, county-level data visualizations and analytics to better identify and track COVID hot spots as they develop and change on a daily basis. The final application facilitates interactive exploration of cases, a spatio-temporal slider, and animation to view choropleth and local clustering maps change over time, at both state and county level. The CSDS COVID Analytics team is co-led by Marynia Kolak, PhD (Assistant Director of Health Informatics), Xun Li, PhD (Assistant Director of Data Science), and  Qinyun Lin, PhD (Postdoctoral Scholar), with multiple contributions by an expanding network of data scientist volunteers.

Data. To get early access to county level data, our team leveraged crowdsourced county-level estimates from the 1point3acres tracker, a dataset generated by a team of volunteers led by an Uber technical lead since the beginning of the epidemic. The dataset is validated daily against state health department estimates. We recently joined a regional effort to amplify impact with UW-Madison’s COVID Data Science team, led by Brian Yandell, to further validate these county estimates against Coronaracker, USAFacts, and state department daily reports.

Interactive Exploration. COVID cases are commonly visualized across multiple dashboards as quantile choropleth maps or graduated points around state centroids. County-level visualizations are rare but when viewed, show a dramatically more nuanced and detailed pandemic landscape. We visualize data at both state and county-scale as total cases, deaths, and population-weighted rates to provide a richer understanding of the pandemic. Case information can be explored by clicking on county or state areas to generate pop-up windows, or to change graphs of confirmed cases.

Temporal Exploration. A temporal slider allows the current view to be updated over time, allowing users to watch the pandemic emerge over time. See this animation of COVID population centered clusters over time as an example https://geodacenter.github.io/covid/lisa.mp4.

Choropleth Maps. For geo-visualization, we adopt jenks natural breaks map to classify the values of the pandemic data for each state/county. A natural breaks map uses a nonlinear algorithm to create groups where within-group homogeneity is maximized, grouping and highlighting extreme observations. We have plans to expand to at least one more choropleth map type (box map) in future iterations.

Cluster Detection. We also include a hot spot analysis, identifying disease clusters and outliers using the Local Moran statistic.The CSDS team identifies hot spots two ways: using the total number of confirmed cases, and then by adjusting for population. Because of the infectious nature of COVID, high numbers of cases anywhere will be of concern. At the same time, identifying areas that have a disproportionately high number of cases within the population is needed to locate areas hardest hit by the pandemic. The team further differentiates hot spot clusters and outliers: clusters are counties that have a high number of cases, and are surrounded by counties with a high number of cases. Outliers are areas that have a high number of cases within the county and fewer cases in neighboring counties, highlighting an emerging risk or priority for containment. We use local spatial autocorrelation statistics (LISA) using queen-contiguity spatial weights and 999 Monte Carlo permutations to generate these metrics. 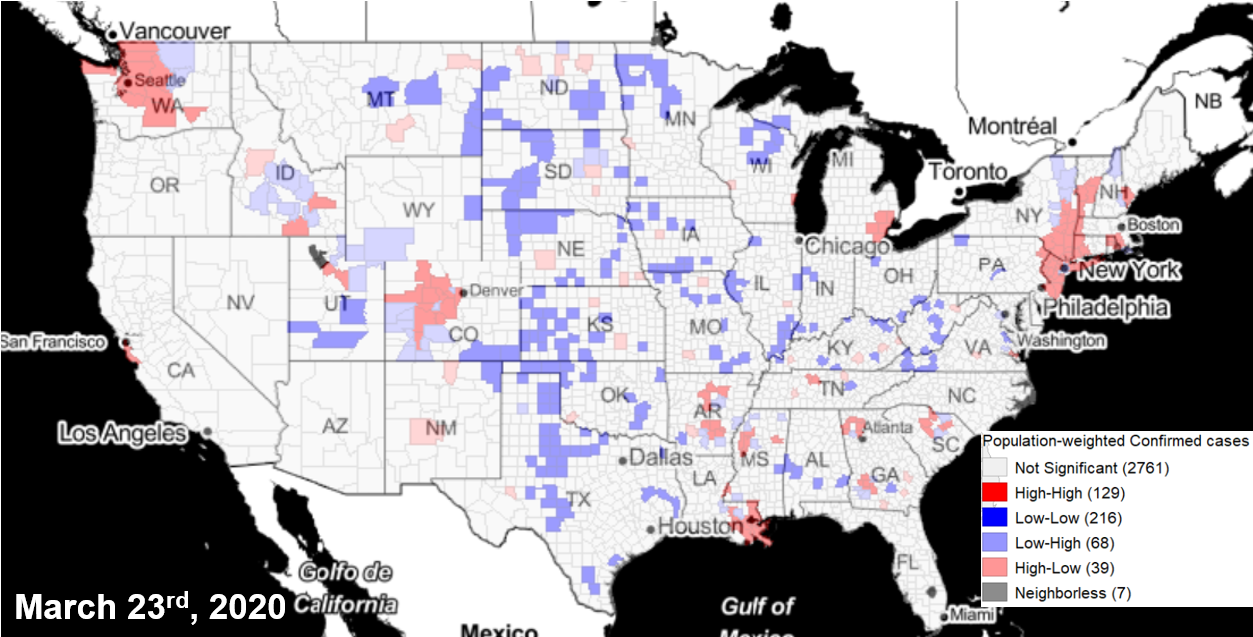 GeoStack. The app is made using Libgeoda as a lightweight C/C++ library that acts as a wrapper to the core features of GeoDa, an open source spatial analysis software developed by the Center. For this web map, it’s customized and compiled to WebAssembly, a format supported by most modern web browsers, and bound to the geo-visualization module via Javascript, which is implemented using deck.gl, d3.js and Mapbox.

Opensource. The Github for our project is public and available at github.com/GeoDaCenter/covid. Contributions are welcome. Volunteers are encouraged to start on the “Issues” page and identify “good first issues” to maximize help efforts. A public release of the application is expected by the end of the week and will continue to be updated with new data and features on a regular basis.

Limitations.  This mapping application is in constant development and thus a work-in-progress. Known limitations exist regarding actual fatality rates, for example, as we may not be aware of the total population infected until testing is expanded. County estimates are in the process of being validated across multiple sources, and may still not be the most updated. Local health departments continue to serve as the most accurate, up-to-date sources. Our team continues to grow new collaborations to better identify the metrics needed for this rapidly changing situation. Issues are encouraged to be posted at github.com/geodacenter/covid/issues and/or by emailing mkolak@uchicago.edu directly.

As of March 23rd, our team identified multiple regional clusters throughout the country of concern. While high case numbers in population-dense, high-travel areas like NYC, New Jersey, and Seattle are of course a focus of concern, we also found concerning clusters in New Orleans, Miami, and Chicago. When adjusting for population, our team found several more throughout the country that may be overlooked. Significant clusters of counties with population adjustment are found in Detroit; Little Rock and Pine Bluff, Arkansas; Greenville, Mississippi; Atlanta and Albany, Georgia; and Columbia, South Carolina. Local hotspots in areas with limited hospital infrastructure can be easily overlooked without nation-wide county-level analysis and spatial statistics.

Two large COVID clusters cover most of Arkansas, and nearby areas in Mississippi. With low numbers of deaths in these clusters and a rapid growth rate of newly confirmed cases, Arkansas is likely highly vulnerable for intensive cases in the coming weeks. Albany and Atlanta in Georgia have demonstrated such vulnerability already and may be further along in the pandemic as several hospitals have already begun to reach stress points; ICU beds are already at capacity in many places. New Orleans and surrounding counties are another area of major concern, all identified as clusters. Recent news reports from the area show Louisiana health officials quoting that the state is averaging a death every two hours from the virus, as of Monday. In Detroit, hospitals are already almost at capacity, and may be spreading faster there than anywhere else in the country because of extremely high local vulnerability.

Hospital infrastructure in areas outside of mega-cities will be less comprehensive but also support smaller populations. With fewer people, even if there are fewer numbers of cases, there are corresponding fewer beds, ventilators, and so forth. These areas may also have less power and bargaining ability to negotiate more products and services required for the pandemic response.

We highlight two series of regional clusters in the tables following, and break out all counties belonging to each group. 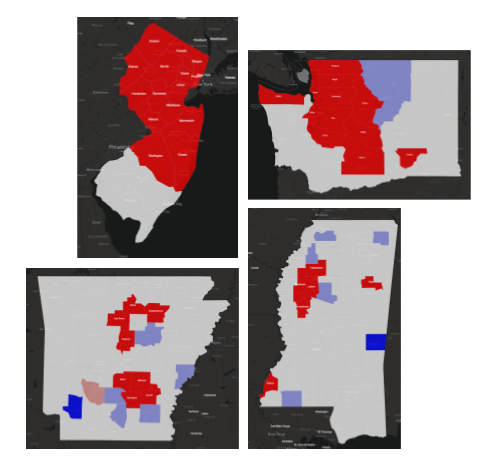 State maps from New Jersey, Washington, Arkansas, and Mississippi. While pervasive clusters can be found through most of New Jersey and Washington State where the pandemic has matured, clusters in Arkansas and Mississippi newly emerge and highlight growing areas of concern. 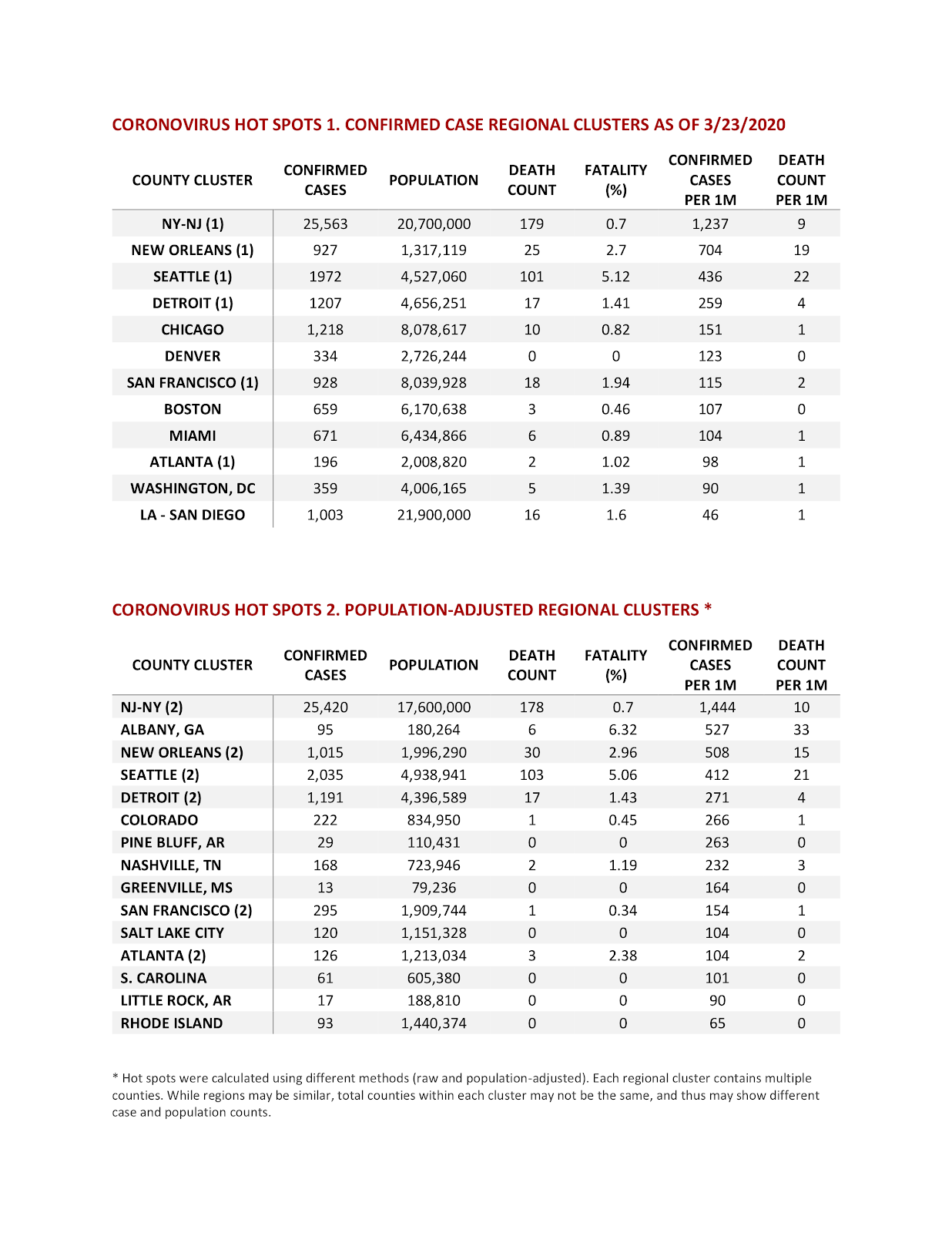