Bridging the separate worlds of cloud-based mapping and spatial analytics

GeoDa-Web is a cloud mapping platform currently under development at the Center for Spatial Data Science that integrates spatial analytics (including advanced statistics) and web mapping in order to gain new insights from larger data through the detection of spatial and other statistical patterns. With the platform analysts can answer questions such as where clusters are located, whether they can be statistically distinguished from spatially random patterns, and what other potential explanatory variables are associated with these clusters. They can model spatial processes more formally to test for associations between spatially clustered outcomes and hypothesized predictors.

The platform bridges the often separate universes of spatial analytics and web mapping. Open source tools for exploratory spatial data analysis has seen active development in the last two decades but they are often desktop-based. On the other hand, cloud mapping platforms, such as Google Maps, CartoDB, MapBox, and the like have become powerful alternatives to traditional desktop-based mapping and Geographic Information Systems (GIS) applications. Unlike their desktop counterparts, web mapping platforms typically do not contain any but the most basic spatial analytical functionality. And next-generation spatial analytics tools that are browser-based, extensible, user-friendly, and integrated with cloud-based platforms are only slowly emerging. 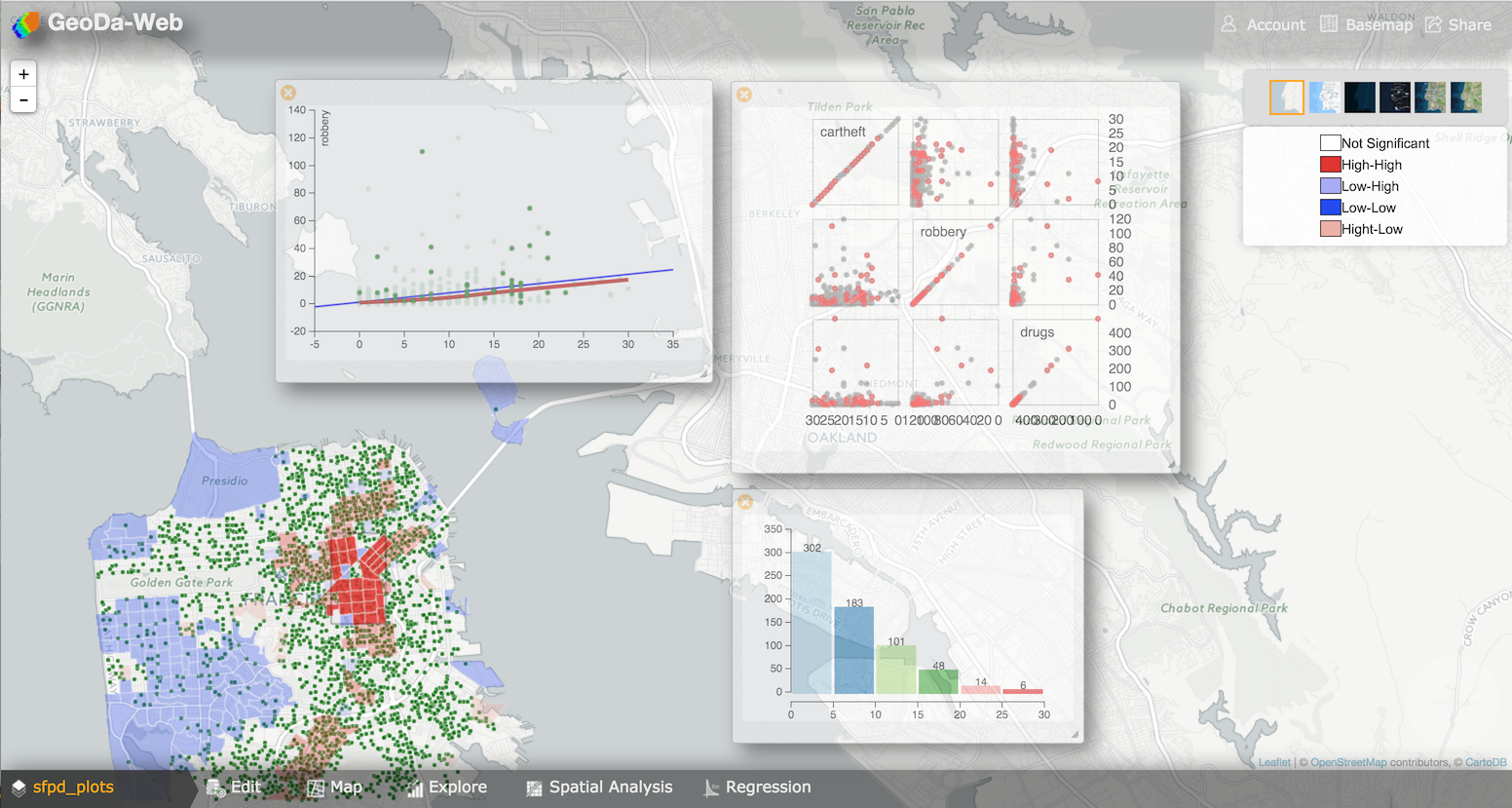 As a CyberGIS platform, GeoDa-Web joins other emerging programs such as R's ggmap and RgoogleMaps in integrating both of these worlds.  As more data are publicly released on web-based open data platforms, it enables researchers to retrieve spatial data from the cloud, conduct exploratory and confirmatory spatial analysis in the cloud, visualize and explore results interactively using cloud mapping and statistics, and publish maps and plots to social media in a user-friendly way. It leverages the code base from the widely used GeoDa desktop software for spatial data exploration, the PySAL Python library of spatial analytical functions, and integrates with the cloud-based CartoDB platform. It allows for the analysis of larger data through a variety of devices, from desktop to mobile. The application can be accessed from within a browser or called from other programs such as Python (later also R). 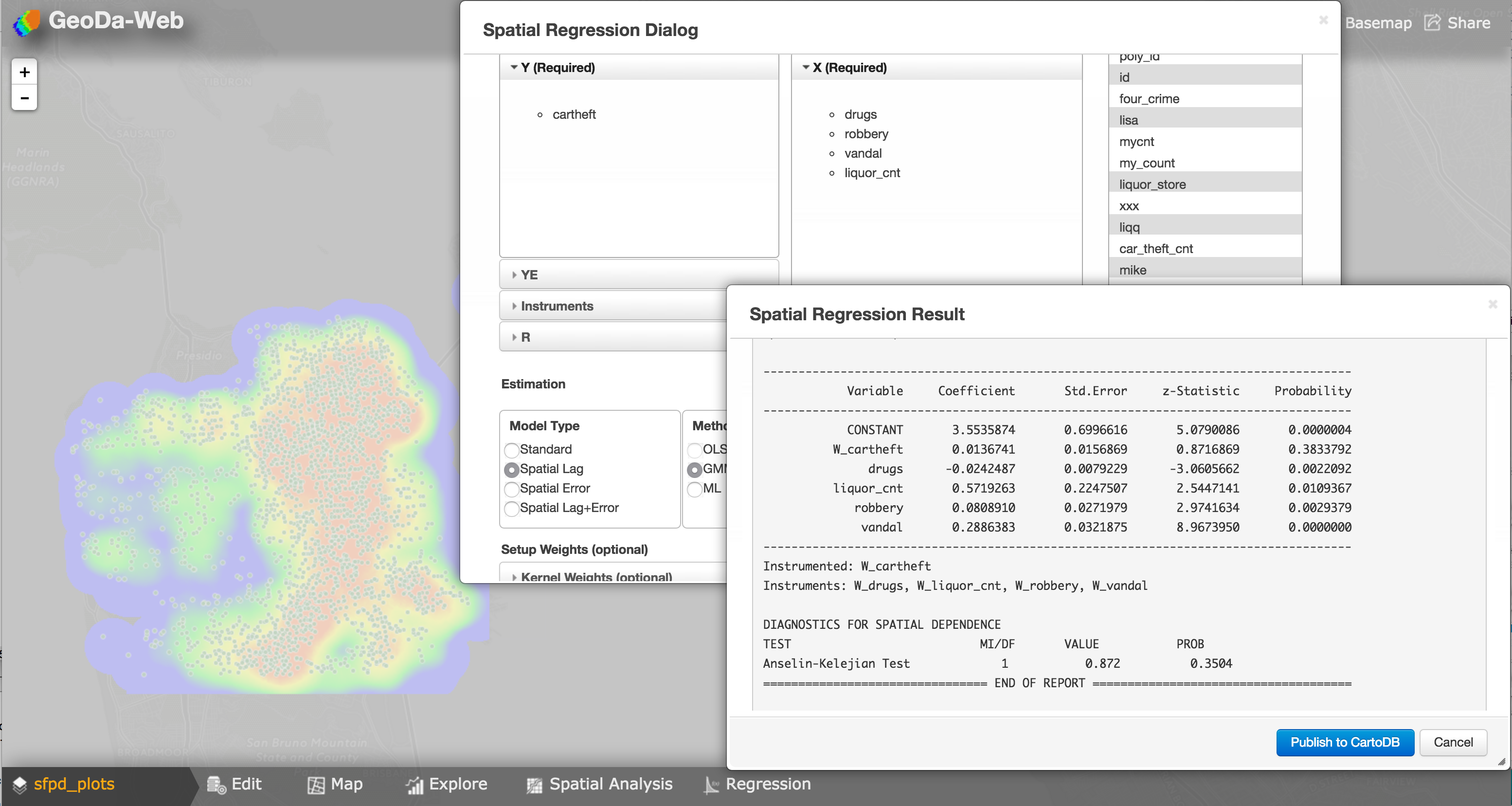 GeoDa-Web as a local front-end for Python and R

GeoDa-Web can serve as a local front-end for computational and statistical programs such as Python and R. Such a connection exponentially extends the analytic functionality that can be mapped and plotted in GeoDa-Web. In addition, Python can be used to generate aggregate results for big data that can then be visualized and analyzed further within GeoDa-Web. 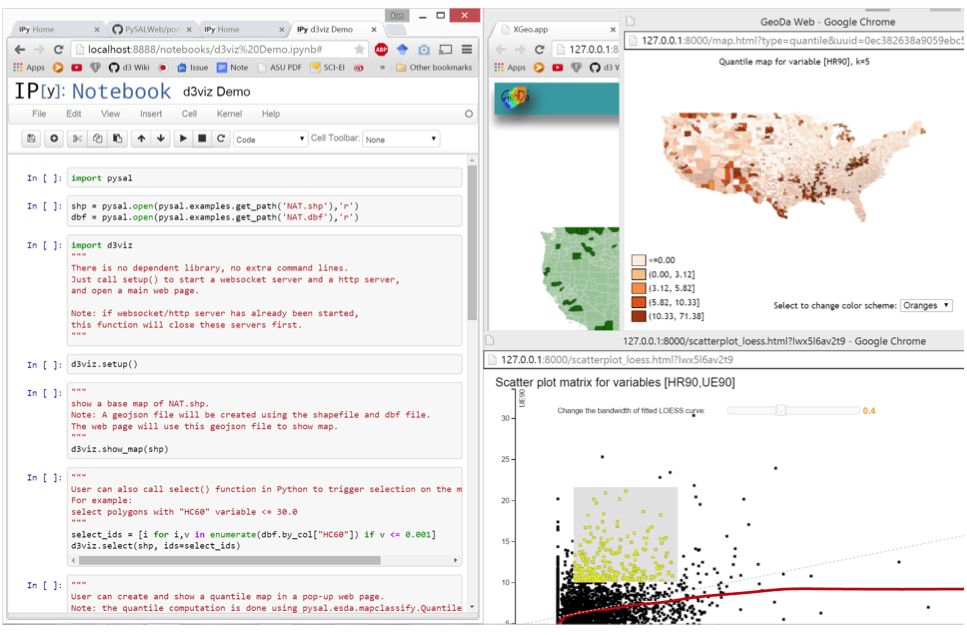 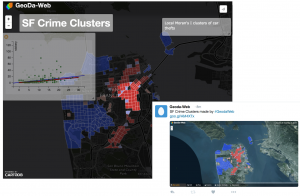 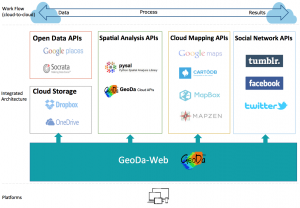 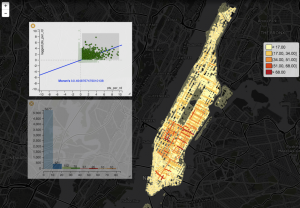